Required cookies are essential to let you move around the website and use its features, such as accessing secure areas, shopping baskets and online billing. These cookies allow our website to provide services at your request.

Functionality cookies are used to remember the choices you make, e.g. your user name, log in details and language preferences. They also remember any customisations you make to the website to give you enhanced, more personal features.

Targeting cookies collect information about your browsing habits to deliver adverts which are more relevant to you and your interests. They also measure the effectiveness of advertising campaigns.

This site uses cookies and related technologies for site operation, analytics and third party advertising purposes as described in our Privacy and Data Processing Policy. You may choose to consent to our use of these technologies, or further manage your preferences. To opt-out of sharing with third parties information related to these technologies, select "Manage Settings" or submit a Do Not Sell My Personal Information request.

The new Renault Mégane has been awarded a five-star passive safety rating after testing by the independent body Euro NCAP, this takes the number of Renault models to have secured the maximum five-star rating in 2015 to four.

The new Renault Mégane features upgraded safety thanks to a suite of driver assistance systems which reassure and warn drivers for ease of driving.

When it comes to safety, the new Mégane shares the benefits of the same Common Module Family (CMF) platform as the Kadjar crossover. Features of this new platform include the use of very high elastic limit steel for the spars, side rails and cross members (notably those situated between the engine compartment and the cabin). A square millimetre of this type of steel can withstand a load of 120kg.

The CMF platform also incorporates effective occupant restraint systems, including dual-generator front airbags, the deployment of which adapts as a function of the type of impact and position of the occupant. This feature enabled the new Mégane to obtain high scores for both adult and child protection. Meanwhile, the seat belts are equipped with pretensioners and adaptive load limiters which adjust the degree of restraint to the severity of the impact and the occupants’ build. In side impacts, front occupants are doubly protected by two latest-generation side airbags and two curtain airbags.

A suite of driver aids

Thanks to the CMF platform, the new Mégane also benefits from the many driver assistance systems already featured on Renault vehicles from the segment above, such as the Espace. These aids are designed to reassure or warn drivers, or for ease of driving.

For ease of driving:

The Renault Talisman was also given a five-star rating at the same time as new Mégane, taking the number of Renault models to achieve the five-star rating in 2015 to four. The Kadjar and Espace, also benefiting from the CMF platform, were also awarded the rating by Euro NCAP earlier this year.

For 15 years, Renault has innovated to prevent occupants from sliding beneath their seat belt in a head-on impact thanks to anti-submarining technology. To develop this technology, Renault uses specific crash test dummies equipped with more flexible groins to obtain simulations that are as close as possible to real-world situations. This technology calls for extensive work on seat ergonomics and on the positioning of the seat belt anchor points. In January 2015, the Euro NCAP protocol – which is made more severe every year – listed anti-submarining protection as a criteria for the first time. 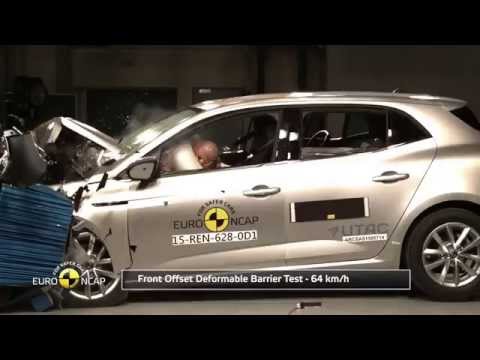 Click here to register for updates about the New Renault Megane

We can introduce you to a selected panel of lenders, which includes manufacturer lenders linked directly to the franchises that we represent. An introduction to a lender does not amount to independent financial advice and we act as their agent for this introduction. Our approach for a new car purchase is to introduce you first to the manufacturer lender linked directly to the particular franchise you are purchasing your vehicle from, who are usually able to offer the best available package for you, taking into account both interest rates and other contributions. If they are unable to make you an offer of finance, we then seek to introduce you to whichever of the other lenders on our panel is able to make the next best offer of finance for you. Our aim is to secure the best deal you are eligible for from our panel of lenders. Lenders may pay a fixed commission to us for introducing you to them, calculated by reference to the vehicle model or amount you borrow. Different lenders may pay different commissions for such introductions, and manufacturer lenders linked directly to the franchises that we represent may also provide preferential rates to us for the funding of our vehicle stock and also provide financial support for our training and marketing. But any such amounts they and other lenders pay us will not affect the amounts you pay under your finance agreement, all of which are set by the lender concerned. If you ask us what the amount of commission is, we will tell you in good time before the Finance agreement is executed. All finance applications are subject to status, terms and conditions apply, UK residents only, 18’s or over. Guarantees may be required.

In the event of disputes we are unable to resolve the Retail Motor Industry Federation (RMI) National Conciliation Service will offer free impartial advice and when appropriate an Alternative Dispute Resolution (ADR) service that we are fully committed to. For further information you can visit their website at www.nationalconciliationservice.co.uk or call 01788 538317.
Back
Vehicle Valuation
Compare Saved Vehicles
Top
Close